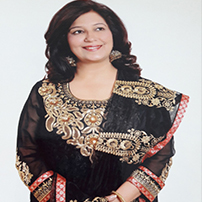 Sadhna Bhatia, a versatile singer, was born and brought up in Delhi. She is well known for singing songs in Hindi, Punjabi, Sindh etc. Her repertoire includes Bollywood numbers, Punjabi and Sindhi folk songs, Sufi songs, kalaams and ghazals.

Since childhood, she had a passion for singing. Under the guidance of her gurus (late) Ustad Amir Khan Sahib and (late) Dada Kan Motihar. She developed her talent and carved a niche for herself in the music industry.

Although her family never allowed her to sing publicly, she somehow managed to participate in the competition “Mukesh Ki Yaad Mein”, while she was still in school in Delhi. The judges were well-known music directors like Shyamji Ghanshyamji, etc. This was her first musical competition and she was awarded a prize for the same. Subsequently, her melodious voice has been mesmerizing the audience for quite some time.

Sadhna got the opportunity of singing the cover version songs of Lata Mangeshkarji, through T-Series. The name of the album was “Popular Songs by Sadhna Israni”. She never looked back after that and pursued music as her profession.
A few of her other well known albums are, “Sona Chandi” through T-Series, “Jhoomo Jhoomo”, a collection of Sadhna’s own private songs, was released through Weston company and now has been taken over by Tips Company, “Geet Shagna De” Punjabi wedding songs by Sadhna Bhatia through Saga Music Company is now available on Saavn app.

She has devotional songs to her credit through Max Company. She also has a number of Sindhi albums to her credit, and the most recent one is Sindhi Sufi kalaams through the Sindhi Academy, in which the music has been given by Padma Shri Bhajan Sopori.

One of her favourite Sindhi songs is “Chho Vain Raat” which is available on YouTube. Her forthcoming song in Sindhi is “Chhal Chhal Chhal Chhal”. She has also sung for the Hindi TV serial “Doosra Keval” directed by Lekh Tandon ji.

A delightful performance was given by Sadhna at “Hunar Haat” in Delhi, in January 2019. She has also given very impressive performances in various parts of the globe, viz., the US, UK, UAE, European countries (like Spain, Norway and Sweden), Hong Kong, Indonesia, Singapore, Bali, and the most recent one in Egypt.

She has received a prestigious award from the great music director (late) Shri Anil Biswas. Kalashree award from the then President of India, (late) Gyani Zail Singh. Awards also received from many bollywood celebrities.

Apart from being a singer, Sadhna runs an event company of her own called Musical Dreamz*. She is into very big corporate and wedding events. She makes it a point to personally supervise the events since several artists from all over the country love to work with her and want to be a part of her event management company. She also promotes new talent. Many successful artists of today have earned fame under her ‘blissful direction’.