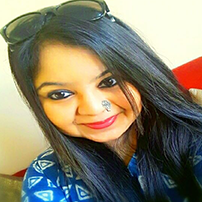 Dr. Sabrina Iqbal Sircar, is a feminist, educator, writer, editor and public speaker. Presently, she is Assistant Professor, Department of Political Science, Cotton University, Guwahati, as well as P.G. Course co-ordinator KKHSOU, and Assistant Editor, Studies in Society and Polity (SSP), Brahmaputra Institute of Research and Development, Guwahati.
Dr. Sircar has had a brilliant academic record throughout and has been a topper from her Higher Secondary till her Masters. In her Higher Secondary, she had the All India second highest in Political Science, and was the Northeast topper in the arts stream. She was awarded the CBSE Certificate for outstanding academic performance. She completed her higher studies from Ladies Shriram College for Women, New Delhi and Cotton College, Guwahati. She held the first class and second position in her graduation and was the Gold Medalist, (first class, first position) in her Masters in Political Science.
She has done her PhD from Gauhati University and her thesis is entitled – The Muslim Family in an emerging Urban Space : A Study of Axomiya Muslims. She is working on women’s issues and is particularly trying to develop the school of Islamic Feminism. Her research papers have appeared in widely acclaimed International Journals and she also writes to raise awareness about women’s rights and to reaffirm their position in society.
Dr. Sircar has been making presentations on issues of women, Islam, and Axomiya Muslims, in a number of seminars and conferences throughout the country. She feels strongly about stereotyping of any kind and is working particularly on the lines of ‘ungendering’ society.
She has also spoken at prestigious gatherings both academic and otherwise, and has shared her ideas and knowledge on various issues. She was also a part of the discussions conducted by the World Bank Group, on the last 13th of February (2018) at OKD, on investment potential and shared prosperity in north-east India. She was also one of the speakers at the the 2nd North East India , Women’s Peace Congregation, organised by the Control Arms Foundation of India, European Union and Welt Hunger Hilfe, at the Kalakshetra Auditorium, Guwahati, India.
Dr. Sircar’s writings try to give voice to the peripheral and voiceless and she has attempted to highlight the identity of Axomiya Muslims and Axomiya Muslim women in particular.
She had also been an avid debater during her student days and had won many national debate championships. She is also associated with various organizations and is a life member of the Indian Association of Women’s Studies and is a part of the core group of the Brahmaputra Institute of Research and Development, Guwahati. Dr. Sircar has been a part of three books on her subject till now; apart from this she has more than 80 published pieces in national and regional newspapers to her credit. She is eager and excited to work and develop the issues of identity, women and Axomiya Muslims in her coming ventures.