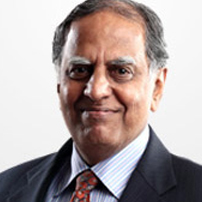 He started his career in 1969 with DCM group of companies at their Group Headquarters in the Finance function. After a year’s stint with DCM he joined Union Carbide where he worked for five years in three locations namely Delhi, Kolkata and Chennai in Systems as well as Finance and Accounts.
Mr. Sandilya joined Eicher in 1975.
He has been a part of the growth journey of the Group and held various positions in different business units. He was the Managing Director of Eicher Motors Limited, the Commercial Vehicles Manufacturing business unit of the Group till 1998 before moving to the Group Office to take responsibility for Group Finance and Strategic Planning in addition to being the MD of Eicher Motors. He was appointed Vice Chairman in October 1999 and as Group Chairman and CEO in April 2000. The group’s portfolio at that time included Agricultural tractors, Commercial vehicles, Motorcycles, Engineering Components, Engineering Solutions, Garments, Leather Products and Business Consulting Services. He is the Non-Executive Chairman from 2006 after superannuation.
He is Chairman and Independent Director of Mastek Limited, an IT company and in addition a member on the Board of Directors of a few reputed companies in the auto components, engineering and infrastructure sectors.
Mr. Sandilya is also the President (Non-Executive) of SOS Children’s Villages of India (SOS India) from July 2007. SOS India is a Not-for-Profit organisation which provides care, compassion and career to disadvantaged Children of our society. It is an International Organisation by name SOS Kinderdorf International headquartered in Innsbruck Austria present in 134 countries and SOS India is the largest single country operation. Under his leadership the organisation has been transformed in to a very professionally run and very well governed one. There have been improvements in every operational area of the organisation namely, Child Care, Education of children, Employment of children, HR Areas including Training and Development, Finance and Accounts, Fund Raising, Advocacy, Schools and the Mother’s Training Centre etc. SOS India has been a recipient of many awards during the last few years.
Mr. Sandilya is involved in the NGO Sector by being a mentor / advisor to those who seek his help. He is also on the Advisory Board of Native Medicare Charitable Trust, Coimbatore taking care of HIV Affected Children.