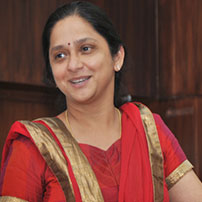 S.Padmasree holds a post graduate degree in Mathematics from Kuvempu University. She joined URSC-ISRO as Scientist Engineer ‘SC’ in the year 1999. She has been working in the Computer and Star Sensor Group, LEOS since then. Her role includes development of onboard software for Star Sensor, establishing simulation and test set-ups required for the characterization and functional testing. She has been actively involved in the analysis of all on-orbit data of star sensor and effectively taking the feedback from this towards improvisation. Her interest includes attitude dynamics, building of star catalog, algorithm development, software development and data analysis. She has authored several national and international papers. She was entrusted with the responsibility of Deputy Project Director for sensors subsystem for the prestigious Mars Orbiter Mission and series of Cartosat-2S. She has delivered technical talks in various educational institutions and organizations. She is a recipient of 2 team awards of ISRO – one for “High accuracy Indigenous Star Tracker” in the year 2007 and the other for ”Mars Orbiter Mission” in the year 2016. A firm believer in team play, her favourite pass time includes listening to Music and is conversant in 5 languages.