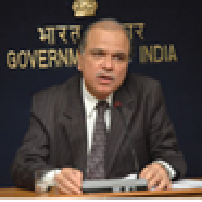 S.M. Khan, is a senior Indian Information Service officer of Government of India currently serving as Director General (Press Registrar and Head of Department), Registrar of Newspapers for India. Prior to his current assignment he served as the Director General of Doordarshan News for over 3 years.

Khan, a 1982-batch IIS officer, had a long innings with CBI as its spokesperson and Press Secretary to then President of India A P J Abdul Kalam.

During his nearly 13 years service in Central Bureau of Investigation, India’s Premier Investigation Agency, Khan was the face of the agency appearing regularly on national and international media, which at that time had been handling several high-profile cases, including Harshad Mehta finance scam, Rajiv Gandhi assassination, Bofors besides others.

Khan had also served government of India’s Directorate of Film Festival(DFF) as Director for two years and was heading the coveted India International Film Festival. As Director, DFF he was also responsible for the National Film Awards and Dada Saheb Phalke Awards. He also represented India at the Cannes and Berlin Film Festival.

Khan has also served at the Press Information Bureau as a Director General and he currently is serving as the Press Registrar of India. He along with the then Minister of Information&Broadcasting Shri Prakash Javadekar released ” Press In India “.