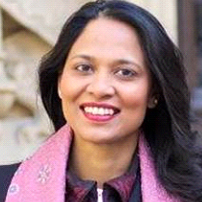 Rushanara Ali is the Labour Member of Parliament for Bethnal Green and Bow. She was first elected in May 2010 with a majority of 11,574, having defeated George Galloway’s Respect Party. Bethnal Green and Bow was one of four Labour gains in 2010. Rushanara was re-elected in 2015 doubling her majority to 24,317 and earning 61% of the share of the vote.
Rushanara grew up in her constituency attending Mulberry school and Tower Hamlets College. She was the first in her family to go to University and studied Philosophy, Politics and Economics at Oxford University. Until her resignation from Labour’s front bench in September 2014 over her decision to abstain on the vote on airstrikes in Iraq, Rushanara served as Shadow Minister for Education and Young People, and between October 2010 and October 2013, as Shadow Minister for International Development. From November 2014 until the 2015 General Election, Rushanara served as a member of the Treasury Select Committee.