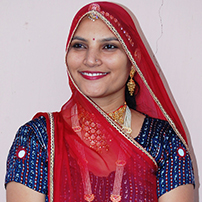 An expert craftsman, she has trained 22,000 artisans from 75 villages, working in the Thar region of Rajasthan. She has been a promoter for handcrafted products made by Tribal women. She has herself modelled for handcrafted apparels made by Thar women on ramp shows at the state and national level. She has been the chief initiator and motivator in making women attend training workshops conceptualized by her for better skill development. She has also designed contemporary products in furnishings and apparels to reach out to the youth of today and popularize and promote handcrafted goods at the international level. As president GVCS she has brought international fashion designers to the doorsteps of Rural women artisans proving to be a direct link between the two.
A role model and initiator of change she has been successful in generating continuous income for artisans and their families. Her business model in the field of innovation has won her critical acclaim at the national and international level and has helped women artisans reach out new clientele. A crusader for justice Ruma Devi today is the face of women empowerment. Her story has inspired numerous other women to stand up and question male dominance.

Today she is successfully leading artisans, both men and women, training them and making them small scale entrepreneurs in their own right through Self Help Groups, providing them with financial security, better health and education facilities, and a promise for a better tomorrow for them and their children.

GVCS under her guidance has had the privilege of participating in the Rajasthan Heritage Week and ramp shows in IGHF for consecutive three years since 2016. It has also been promoting the rich heritage of Rajasthan state in HEIM Textile Fair Germany, Singapore Craft Fair and the prestigious London Fashion Week. Its work has been recognized and appreciated in the British Patchwork and Quilting Magazine.