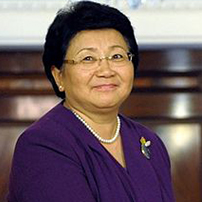 Roza Isakovna Otunbayeva served as the President of Kyrgyzstan from 2010-2011.
She began her political career in the early 1980s, becoming the Deputy Head of Government and Foreign Minister of the Soviet Kyrgyz Republic. She was then invited to the Soviet Foreign Ministry in Moscow, where she later worked as President of the Soviet National Commission of UNESCO. In 1991, Roza Otunbayeva returned to the newly independent Kyrgyzstan to serve as Vice-Prime Minister and Foreign Minister. She was the first Kyrgyz Ambassador to the United States and Canada, and later to the United Kingdom and Northern Ireland.
From 2002 to 2004, she worked as Deputy Head of the Special Representative of the UN Secretary General in a peacekeeping mission to Georgia before returning to Kyrgyzstan to take an active role in democratic changes of the country. In 2007, she was elected to the Kyrgyz Parliament and led the opposition faction until April 2010; she became President in July of that same year.
Roza Otunbayeva holds a Ph.D in Philosophy from the Moscow State University. She currently heads “The Initiative of Roza Otunbayeva” International Foundation.