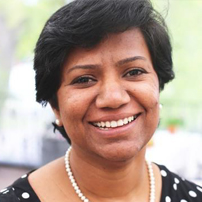 Ronia Virginia is an accomplished leader in the domain of intercultural l integration as well as leading several social ventures.
She started her career in the IT sector in India and relocated to Sweden along with her family more than a decade back. Having spent her childhood in several regions across India, she had the opportunity to learn and experience different culture which is an integral part of the world’s largest democracy . Moving to Sweden, the relevance of the cultural gap and its associated impact became even more evident both through her social surroundings as well as the professional world. She founded the well renowned Synergy Partner Sweden, which focuses on how to increase cohesion and collaboration in a multi-cultural set up. At present she is working with leading Multinational Organizations based in Sweden who are partnering more and more closely with India and other countries . As a founder of SynergyPartner, she is specialized in providing a methodical approach to assess , understandand implement intercultural development programs to increase collaboration and integration.
In addition to her above initiative , she also engages as a consultant for Better Business International Sweden focusing on country specific cultural development. She has studied Intercultural communication from the Stockholm University and Södertorns Högsokla in Stockholm
She was also part of the executive committee for Namaste Stockholm working closely with the Indian Embassy in Sweden which showcased the intercultural tie up between both India and Sweden 2015 & 2016.
With regards to her social ventures, she has worked with Project Hilight India, which was aimed at providing solar based lighting systems to remote locations in India with. The heart of the project was women empowerment and better health. This project was for the rural India where there is no electricity it helped in empowering families especially women to increase their productivity specially at night and hence increasing their income. The project, supported by Tillväxtverket, a Swedish Governmental Agency, consisted of leveraging Swedish Technology to bring socio-economic benefit in India.