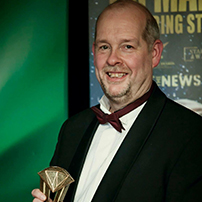 “Roger Cheetham has turned the horrific experience of being an attempted murder victim into something he now sees as one of the best things to happen in his life. Instead of viewing this as a negative that happened TO him, he now views it as positive, that happened not only FOR him, but FOR the many it’s enabled him to truly inspire. Roger has delivered his inspiring message of resilience, via his talk and workshops, before networks around the world. Roger has also delivered award-winning work on resilience, in school classrooms and assemblies. Roger is a true inspiration to all ages!”