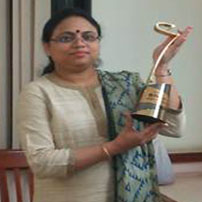 She is a Senior Scientist in Indian Space Research Organisation with a key role in realizing the Mars Orbiter Mission, which created history of being the first mission to reach Mars in its first attempt.
She did M.Sc. in Physics from Lucknow University and then M.Tech from Indian Institute of Science in Bangalore. She always had the fascination about space , an urge to do something different from a normal trend . Collecting news articles related to any space activities by ISRO or NASA was one of her hobbies , during her school days in city of Lucknow .The dream of joining the space agency came true in 1997,November. She has worked for many prestigious missions of ISRO and also handled responsible position of Operations Director for many missions.
Being the Project Manager and Deputy Operations Director for MOM , she , with her team, was responsible to execute the critical operations of Leaving Earth and Capturing Mars , which could be realized flawlessly.
Ms Ritu Karidhal has published more than 20 papers both in International and National Publications.

She has been the recipient of many awards including “ Young Scientist Award in 2007 by Shri Abdul Kalam , the then President of India , “ , “ISRO Team Award for MOM in 2015 ” , “ASI Team Award “, “Women Achievers in Aerospace, 2017” by SIATI(Society of Indian Aerospace Technologies & Industries (SIATI), “ Birla Sun Achievement Award “ by Bank of Baroda . Presently She is working for ISRO’s first Landing Mission on Moon i.e. Chandrayaan-2.