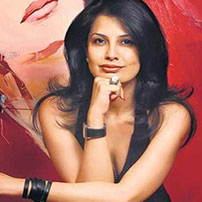 Ritu Beri brought her label alive in 1990 when India was still awakening to the couture era. Swift as silk she forayed into France, a protégé of embroidery maestro Francois Lesage. The first Indian fashion ambassador to show on the catwalks of Paris she then traveled the globe showing her creations to critical acclaim. Her presentations gave the French fashion connoisseurs a glimpse into mystical India. The Parisians were abuzz with exclamations and praises of the rich display of luxurious silks, brocades and the prevalent use of Mogul motifs.
Former US President Mr. Bill Clinton, Hollywood celebrities, Supermodels, famous Parisian Socialite, the Swarovski family, to the Prima Donna of Indian Movies and a bevy of other VIPs have all worn the Ritu Beri label. The Sunday Observor, London, said of her: “Ritu Beri is the Donatella Versace of India. She is the first lady of fashion in her country.” She received an Honorary Doctorate from Rai University, India. She is the Founder and President of The Luxury League.