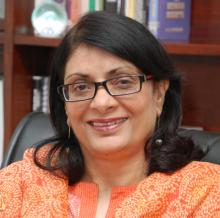 Rita Sarin, Country Director of The Hunger Project in India, leads a nationwide alliance of more than 60 organizations implementing strategies to empower women in local democracy. She has committed her life to igniting and sustaining the leadership spirit of elected women at the grassroots level in India.

Under her leadership, our programs are empowering and building the capacity of elected women representatives in village councils called panchayats so that they effectively exercise their socio-economic, political and cultural rights.

Rita has had many successes channeling bilateral and multi-lateral partnerships to strengthen the voice of grassroots women in local government and in society at large. In addition, she has successfully garnered the support of various government officials at all levels to broaden the scope of women’s role in local democracy as well as bridge the gap between the marginalized, poor and their government.

Rita’s journey to stand up for women’s rights began with her work with women prisoners in India and the deep recognition that gender-based violence against women, poverty and inadequate access and control of resources were just some of the causes for the low status of women in the country.

Rita was on the team which set up India’s first women’s non-governmental organization, the Centre for Women and Development Studies. This phase in her life gave her an opportunity to live in villages of India for 7 years and work with local communities on issues of gender equity and development.

Prior to joining The Hunger Project eight years ago, Rita served as a National Program Advisor for the Swedish International Development Agency (SIDA) for 15 years, where she established and supported a network of 120 NGOs in 18 states working on the empowerment of women in local governance.

Rita was also the core person to set up an Inter Agency Facilitating Committee for Beijing, formed out of the “women and development donor group” in India for the UN Beijing Conference. This group comprised of several bilateral, multilateral and international donor agencies. This core committee later became a best practice for donor coordination towards key International Conferences.

Rita currently is a member of the National steering committee for sustainable nutrition security in India; and is a member of the Government of India’s joint working group with Government of Afghanistan to build a strategy to forge the agenda of locally elected women forward in Afghanistan. In addition, Rita recently served as an advisor on all India research study on elected women representatives. On the civil society front, Rita serves on the Boards of Action Aid, M.S Swaminathan Foundation and PRIA, all three organizations playing a critical role in forging democracy and ending poverty in India.

In April 2009, Rita was recognized as one of 25 Women of Excellence by the FICCI Ladies Organization (FLO).

Rita loves spending time with her family, especially her daughter, who has witnessed her journey, and is herself a young independent woman chalking her own path to work on the same issues as Rita, and shows great promise in following in her footsteps.