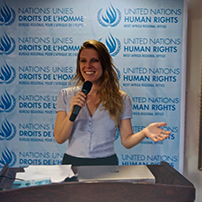 Rhiana Spring is an award winning international human rights lawyer, advocating for women’s rights across 4 different continents. Rhiana Spring has defended survivors of domestic violence in the courts of Argentina; coached women entrepreneurs in Ethiopia; and challenged bias and gender inequalities in businesses in the Philippines.

Her most recent role with the United Nations in West Africa has seen her managing and implementing multinational projects and leading trainings on human rights and gender for governments in the region. She served for the Foreign Service in multiple locations and advised on the legal teams at the International Court of Justice and Amnesty International Lawyers.

Originally starting out in tech and founding IT Works! at the age of 17, Rhiana Spring set up the charity Sports for a Better World in 2013. Most recently she co-founded Direct21, ensuring access to information for rural populations and refugees through an effective platform connecting individuals and resources.

Rhiana Spring holds an LL.M. in Public International Law from the London School of Economics (LSE); a B.A. (Hons) in Law from Oxford Brookes University; an LLB from BPP London Law School; and is currently fluent in 5 languages. Rhiana Spring is the recipient of the Women Economic Forum Award for Exceptional Women of Excellence 2019.