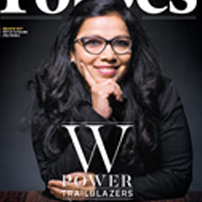 Revathi Roy is a celebrated social Entrepreneur in the field of Womens Empowerment and Workforce Participation since 2007.

She holds the distinguished pride of pioneering Asias 1st ever Womens Cab service way back in 2007 and now runs an All women logistics company HEY DEEDEE, where the riders and drivers are all women.

Revathi wants to create jobs for 10000 women in the logistics industry.

She is also a TED speaker, was featured on the cover of FORBES INDIA, has won the NITI AAYOG AWARD -2016 for WOMEN TRANSFORMING INDIA, Cover of Femina – Women icons issue – October 2017 and many other notable awards. She has also contributed to a white paper called WOMEN IN TRANSPORTATION, which has been jointly published by IFC and WORLD BANK, and the research conducted by UBER and ACCENTURE.