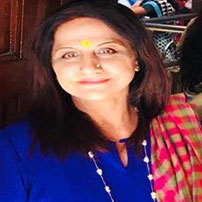 Renu Sharma is a multi-faceted woman who combines in her person, an entrepreneur, a social activist, philanthropist, an advocate of public causes, a mentor for budding industrialists and an advocate of women empowerment. The stamp of her versatility is seen in her every activity.

Renu Sharma began her professional career in 1977 with Indian Express under the intrepid chairman of the Express group late Shri Ramnath Goenka who is a well-known crusader for ethics & fundamental rights in public life and freedom of the press in particular. She stayed with the group until 1985.

As an innovative entrepreneur, Renu Sharma was the first woman in the nation’s capital to start an independent Offset Printing Press with single and 4-colour offset printing press which she utilized to establish a flourishing advertising network securing the accounts of industrial majors such as Godrej Philips, Escorts ltd., Prentice Hall of India, Northern Railway, Petroleum Conservation Research Association(PCRA) and Election Campaigns of a number of contestants in India & Nepal.

Her business acumen and constant endeavour to find new business frontiers led her to promote Indian jewellery to destinations such as USA, UK, Singapore,UAE,Brazil, Pakistan, Kuwait and Bahrain ,among others.
Ever an innovative business mind, she added another feather to her cap, early in her career by launching the first showroom of jewellery the ‘Tanishq brand by Titan’ of TATA group of enterprises.

She established the first model showroom by the name of Rajwarah Jewellers in New Delhi in 1993, which presently she is the director of. Under her direction the firm developed into a highly successful retail chain for precious jewellery in Delhi and neighbourhood. She has established a wholesale office by opening a Wholly Own Subsidiary in a FreeTrade Zone in New York, USA ; through which their vast export and import activities are conducted.

She specialized in international trade as part of an MBA degree at Indian Institute of Foreign Trade a deemed university for international trade (IIFT) New Delhi.
Various related activities include participation in Trade Shows, National and International including in countries like USA,UK, Singapore, Malaysia,UAE,Bahrain, Kuwait and Brazil.

Notably,she participated as a jeweller in the India Show in Pakistan in 2005, as part of the trade delegation organized by the Indian Ministry of Commerce and Industry.
As recently as September 2016, she was Design Partner at an event in Lalit Hotel New Delhi where she was given the honour of giving away the awards to the winners of Retail Jewellers Guild.

Another dimension of her professional achievements is her deep commitment to social entrepreneurship and empowerment of women in the cause of social justice. Her commitment to community service began while working with late Nanaji Deshmukh on his Chitrakoot Social Project. She was associated with launching of the in-house magazine “YUGANUKUL NAVRACHANA” for the Chitrakoot Project both in English and Hindi.
As a director at the Centre for Bharatiya Marketing Development (CBMD) ( a unit of Swadeshi Jagran Foundation) she helped organize Swadeshi Melas all over the country. The first ever Swadeshi Mela was held at the Somaiya Trust Ground in Mumbai in 2003, with “Boundless Bharat”as the theme, with participation of numerous Swadeshi Entrepreneurs.
She is credited with introducing for the first time Khadi at a Ramp Show called “Paridhan Utsav” (Fashion Show)in Mumbai, Delhi and Chandigarh in India and Mauritius.

To encourage women entrepreneurs, Renu Sharma felicitated a few outstanding women achievers with “She the Change-Nari Udhyami Award” in 2015(felicitating 25 women in Delhi)and 2016(felicitating 24 women in North East and 22 in Delhi.)

In further efforts to acknowledge and reward independent women entrepreneurs, she also organized events in Guwahati at Indian Institute of Entrepreneurship in collaboration with Gandhi SmritiDarshanSamiti and Beti & Shiksha Foundation. The latter was started by Renu Sharma as an NGO.

As part of her social work, she supported significant events by raising sponsorships. Which included a debate competition at Janki Devi Memorial College “Women Emancipation is Possible Only through Economic Empowerment”to sensitize the youth to the relevance of women in economic development. She also participated in a seminar titled “Relevance of Empowerment of Women”

Fulfilling her commitment towards society for various social causes she sponsored the trophies to the winners at the 1stcharitable football match between Members of Parliament and Celebrities which was kick started by Yoga Guru Baba Ramdev to raise awareness on two flagship initiatives of Prime Minister Narendra Modi – Swatch Bharat Abhiyan and Beti Bachao Beti Padhao Mission.

Besides organizing and supporting the above events RenuSharma has been a consultant to “Believe India Foundation”, an NGO working for economic empowerment of women, issues and challenges faced by women entrepreneurs.