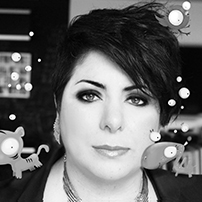 With more than twelve years in the gaming industry and eleven years in high education, she started this awesome journey by founding the art department at AKE/Digipen-Lebanon.
For 6 years, she was the head of art department, worked on several types of projects varying from 2D and 3D game production, illustration, character designing, modeling, texturing, training and recruiting new artists. She founded Wixel Studios in 2008 with Ziad Feghali and Karim Abi Saleh. It was the first Indie gaming company in Lebanon and one of the first in theMiddleEast.
She is the lead artist and art director of all the games produced under Wixel Studios. Addition to her artistic responsibilities, she is heavily involved in the game design, game mechanics and gameplay of the top hits created at Wixel.
She set the visual standards that enabled Wixel studios to become the pioneer in the region for delivering high end games for the web, Facebook and smartphones. she was responsible of recruiting and training the best talents to deliver the international level of content that Wixel is famous for.
Alongside her Wixel role, she is a tutor and advisor for some of the most talented Lebanese students in two major private universities in Lebanon, Balamand (ALBA) and the Holy Spirit University (USEK) in which she created the animation curriculum for the multimedia MA students.
Honors and Awards
• Winner of the WIT Women in Technology Award 2010
• Speaker at TEDx Beirut 2011
• Selected one of The top 20 Lebanese entrepreneurs by executive magazine
• Winner of the WOW award for artistic expressions 2013 (6th New Arab Woman Forum)
• Selected one of the most 5 powerful women in gaming by inc.com in 2013
• Selected one of 25 Awesome Women in Gaming in 2014
• Selected one of Top 10 High Profile Women in Video Games in 2014
• Selected one of The World’s 100 Most Powerful Arab Women in 2014
• Selected one of The World’s 100 Most Powerful Arab Women in 2015