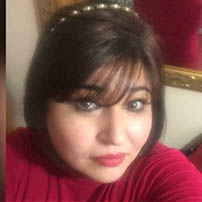 Razia Hamid is a legal professional as well as she is a human rights activist since last 25 years . she is founder of WAGES Women & Girls Empowerment Support Ltd which is a Non-Profit Organization and works voluntarily for the help and support of vulnerable and victim of violence and torture. she gots many awards for her outstanding community work including ” Role Model Women Award by Slough Council & Police on International Women day celebration in 2014. Also Ealing council gave her award on her outstanding community work for her community. Also W5 Production (the biggest production company in UK) has made a documentary film on WAGES and her under EPAREX project which was funded by Home office and European Commission and this film was submitted to European Commission with EPAREX project in 2011-2014. She is also an anchor person and have presented many TV live programs on different TV and Radio channels in UK . “BE BRAVE” was a live TV program on some worldwide 854 where she used to have interview on air if victim of violence and torture women & girls