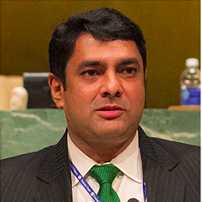 Ravi Karkara is Senior Advisor on Strategic Partnerships and Advocacy to the Assistant Secretary General to the UN and Deputy Executive Director, UN Women. With over two decades of experience, Ravi is an expert in various international development-related fields, driving innovation, building strategic partnerships, and promoting advocacy and programming in the areas of human rights, gender equality, accountability and social justice. He is also the Acting Head of Private Sector for UN Women.

Ravi has been the force behind several high-value strategic partnerships, resource mobilization, and key advocacy initiatives for UN Women – including partnerships with the City of New York, MasterCard, Citi Group, Philantropic Age, to name a few. His innovative advocacy initiatives include Ringing the Bell on Gender Equality in over 34 stock exchanges across the globe, and the Gender Equality March from the United Nations headquarters to Time Square in New York City. Ravi has been instrumental in supporting UN Women’s work on strategy development – this includes Strategy on Youth and Gender Equality, Working with Boys and Men in Gender Equality. He works with celebrity influencers as part of Planety50-50 Champions in support of UN Women. Ravi represents UN Women as the co-chair of the UN Inter-Agency Network on Youth and Development and founded its Working Group on Youth and Gender Equality. He developed and led the youth outreach of the UN Secretary General’s My-World Survey to deliver votes from more than 6 million youth from 193 nations. He is the UN nominated cochair of the innovative and impactful UN&CSO Policy Strategy Group World We Want 2030.

Ravi has been the recipient of the prestigious NOVUS Award – that unites global leaders from around the world to tackle today’s big challenges via actionable change. He has received the prestigious “Be The Story” Award LitWorld. He received the prestigious International Social Activist Award – Crown Jewel of Social Activist. He has been awarded the Global Officials Award for his work on youth and gender equality and the Inter-Faith Award on promoting peace and harmony. He was also appointed as Junior Chamber International Ambassador. He is listed as the Top 10 Global Diversity Experts produced by Prestigious “Global Diversity List” by BNP Paribas and the Telegraph UK.

Previously, he has also worked with the UN Millennium Campaign, UN-HABITAT, UNICEF and Save the Children and has written more than 80 publications/articles in his career spanning over two decades. He has extensive experience in capacity development and participatory facilitation across generations around the world and has over 1000 training days to his credit.