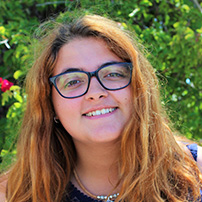 I’m a master’s student in Applied Ecology at the University of Aveiro (Portugal). I strongly believe that Environmental Education is a way of changing the world. I’ve been in Damanhur, Italy for a month in 2011 with my mom while she was attending an EDE course. After that, I made a PDC in 2011 with Lesley Martin in Portugal and 2 Transition Courses (one with May East and another with Portuguese facilitators) In 2017 I graduated in Biology at the University of Évora (Portugal). While I was graduating I was involved in the student biology association at University of Évora where I organized several events. Right now, I’m part of the financial supervisory board of the National Association of Biology Students (ANEBio). Besides Damanhur, I’ve visited Tamera, Portugal several times and in 2017 attended the GEN Ecovillage Conference in Angsbacka, Sweden.
Recently I made a GEN Training of Trainers in Lilleoru, Estonia and I’m one of the GEN Ambassadors in Portugal.