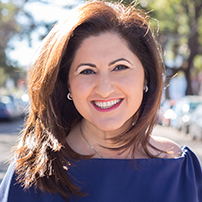 Randa Habelrih is the Founder and Chair of ‘Autism MATES’, an organisation that empowers young people on the autism spectrum and their mothers, giving them a platform and a voice.
As a cosmetic industry marketing executive, Randa was carving a successful careers until her son was born with very high needs. Life changed and her path as an advocate was cemented. Her son who has autism, experienced intense bullying and social exclusion through school. As a result, Randa created a video, which won first prize in the ‘Focus on Ability’ short film festival. Her book ‘Dealing With Autism’ is a part of the overall strategy to raise awareness about exclusion and bullying. But she knew more had to be done; that programs were needed for schools and also post school, where employment and inclusion were even more elusive.
The Autism MATES (Mates Assisting to Engage Socially) programs provide solutions to change society’s standards of inclusion for young people on the spectrum and to empower and support their mothers. Current anti bullying programs are reactive; MATES prevents the problem of bullying instead of trying to fix it once manifested.

MATES programs include
o School MATES – a high school, peer led, leadership and social inclusion program.
o Best MATES – an interactive puppet show for primary school students. It’s story about friendship and inclusion between Tommy the Turtle and Danny the Duck, with a powerful anti bullying message.
o Model MATES – a fashion industry event which highlights that even in the most elite of industries, there is room for the inclusion of people living with disabilities.
o Autism and Me Conferences – featuring speakers on the spectrum and also their mothers. At these events, the humanity behind an autism diagnosis and the different faces and challenges of the spectrum are presented
o Autism MATES Facebook group – an online support group for mothers who want to engage, collaborate and learn.

Randa’s work has been recognised internationally winning the gold Stevie Award for ‘Women Helping Women’ at the International Women in Business Awards in New York in 2017 and silver for ‘Best New Product or Service’ for the MATES programs.
Randa is also the co-founder and chair of St Michael’s Meals, a charity servicing Sydney’s
homeless; feeding the hungry with God’s love.