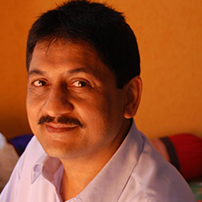 As a Concerned Citizen, Rajkumar Dugar has been focussing on taking up projects which bring benefit to society. In 2014, he co-founded Vasanthanagar Residents’ Welfare Association and anchored several highly successful projects for 3 years. In 2019, he founded CITIZENS FOR CITIZENS (C4C), and led many public interest programmes like Tree-planting, Streetlights, Micro-level Traffic issues, Public Transport, Tree Survey, integration of Public Transport (Cantonment Metro Station), Train to Airport, reviving River Vrishabhavathi, etc. He is actively involved in Koti Vruksha Sainya, a movement for the afforestation of Bengaluru.

From March end this year, with C4C Teams, he has been actively engaged in making life easier for others by undertaking implementation of Social Distancing, stitching and handing over Cotton Masks, Public Campaigns of Masking the Unmasked, reaching Dry Rations to the Needy, taking care of young and vulnerable plants, educating general public with Reinforcing Posters which have strong graphic and simple bilingual text messages. C4C has also requested the Government for a branch of AIIMS in Bengaluru.

During the past few years, for all his work, he has been felicitated and awarded by a few organisations, including Association for Information Technology (AIT) for Social Service and St. Joseph’s Indian High School as Distinguished Alumnus. He was also the finalist in the Citizen of the Year category, in the Namma Bengaluru Awards for 2018.

Born in Ladnun, a small town in the heart of Rajasthan. Rajkumar grew up in Bangalore from age 2. He graduated with a degree in Electronics Engineering from RVCE, Bangalore. A career in manufacturing, business development, and customer engagement enabled him to successfully run his venture in IT Hardware.

Rajkumar has a positive attitude towards life. When he was 1 year old, he was struck with Polio. However, he does not let that impede any of his activities, and he loves walking, swimming, cycling, etc. He believes in staying fit and healthy by exercising every day. During the present pandemic too, he advocates Mental and Physical Fitness coupled with Positivity.

He lives in Bangalore with his Mother Smt. Sampath Devi, his wife Madhu, who is a great support to him. He has a daughter, Karishma, who is married and a lawyer by profession and a son, Arihant, who is studying to be a Chartered Accountant.