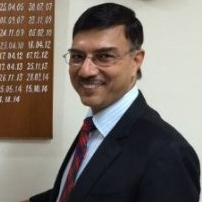 As a young Indian Administrative Service Officer he worked in India’s North-East, as Deputy Commissioner incharge of Nalbari District in Assam and Head of the Rural Development Department looking after various poverty eradication and nonconventional energy programmes in Assam.

He has also been Chairman & M.D. of Assam Power Distribution Company Limited and Assam Power Generation Corporation Limited and Assam Electricity Grid Company Limited looking after entire Power Sector in Assam. During his tenure, Power Sector in Assam recorded a growth of 16.8% compared to national average of 7%. He has also been Secretary, Planning & Development Department and later Additional Chief Secretary, Planning & Development Department, Government of Assam.

He has held important positions in Government of India which include Executive Director of the India Trade Promotion Organization (ITPO) from 2004-2009, under the Ministry of Commerce & Industry during which period trade exhibitions and trade promotion activities were organised in 45 countries with focus on US/Europe and Brics countries. He was Member in National Highways Authority of India implementing India’s ambitious Highway Infrastructure Programme from 2010-2013. During 2014-15 he worked in the Ministry of Chemicals and Fertilizers as Special Secretary and Financial Adviser. During 2015-16 he worked as Secretary (Sports), in the Ministry of Youth Affairs & Sports – and successfully organized largest ever contingent of 119 sport persons to Rio Olympics 2016 and successful South Asian Games 2016 at a short notice of 100 days.

He has been a regular guest faculty with LBS National Academy of Administration, Mussoorie under Government of India since 2000. He occasionally contributes articles on scientific and cultural issues.