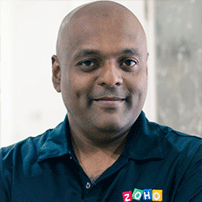 After (un)graduating out of IIT-Madras as an Engineer in Electronics and Electrical Communication, Rajendran dove headlong into the World Wide Web, and has, happily, never come up for air since then.
He spent seven years at Xerago, Asia’s largest New-Age Marketing Entity, hand-picking a technical team and managing projects and services for clients including Citibank and Sify. As the Chief Algorithms Officer, he crafted a Customer Tracking Platform for the web long before A/B testing became a buzzword.
The “Seven Year Itch” saw him leave Xerago to pursue his lifelong ambitions of building an educational entertainment software. After joining Zoho Corporation in 2004, he built and launched Jambav, a portal for dozens of tools and games for parents and children, with a special focus on children with special needs like dyslexia, Asperger’s, and autism.
ToonDoo from Jambav, arguably the fastest way to create and share comic strips online, is a particularly noteworthy gem in that collection.
And, that’s when the iPhone ushered in a mobile revolution in the world of software.
In the past five years, he’s been happy-surfing the leading wave of this tsunami, building innovative mobile experiences for Zoho’s suite of products on the cloud.
Leading a mobile-first mindset and conceiving Apps and services that echo a strongly-held conviction about “Big Data + Small Apps”, he manages and guides a team of seventy-five developers, artists, and visual designers spearheading Zoho to the forefront of the mobile revolution.
Beyond work, he is a contra-academician at heart.
Feeling strongly that the education system in India needs a reboot, he now walks the talk, doing his small bit by ‘free-schooling’ his 15-year-old son at home