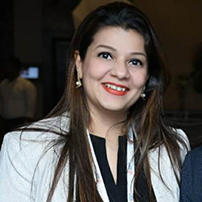 Rachna has over a decade of experience in Marketing Analytics, Research and Business Development in multiple verticals, i.e. Technology, Healthcare, FMCG and Ecommerce. She heads the Strategy & Business Development for Social Beat (& Influencer), a well-known digital marketing agency with offices in Chennai, Bangalore & Mumbai. She is also a part of the founding core committee of the organisation. Rachna is a facilitator for the #IAMRemarkabale Programme by Google, an initiative empowering women and underrepresented groups to speak openly about their accomplishments in the workplace and beyond. Rachna has been awarded the Women Super Achiever Award by the HRD congress in Feb 2017, held in Mumbai and also has been recognised as the Top 50 Super Media Superwomen in 2018 by Social Samosa.
Rachna began her career as a research investigator with Madras Institute of Development Studies and contributed to projects in the domain of indigenous technology and Trade Facilitation with WTO as the focus. Her research contributions include the following publications
– Ganatra, R.G.An Evaluation of EDI: A Trade Facilitating Measure in India’s International Trade, Review of Development and Change, Vol X, Number 2, MIDS,2005. Also presented at the Malcolm Adiseshiah seminar on IT & social science research, MIDS,Chennai,2004
– R. Ganatra and M.Bhagabati, Trade Facilitation and WTO: An Indian Perspective, Monograph Series 7, 2007
Being more driven than ambitious, explains her love for startups and the accompanying work culture which have given her the opportunity to develop cross-functional skills. She also worked with LatentView Analytics as an Engagement Manager and handled full cycle of business research & analytics projects that aid in strategy formulation and decision making. She was actively engaged in both client and team management, alongside developing and delivering of solutions. She had also spearheaded various project-based training initiatives for the teams in-house.
Rachna has a Masters in Business Economics, and a BA in Economics from the University of Madras.A recipient of the prestigious Thiru V L Ethiraj Scholarship for the Outstanding Student for the Year and an University topper in Statistics.
An avid movie blogger, theatre lover & Traveller, my mantra in life is summed up in a a quote from Marianne Williamson, “Atonement means putting love first, in business as well as everything else”.