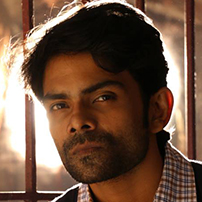 A Computer Engineer and University Gold Medallist who finished his Masters in Computer Science from the University of Illinois, Urbana-Champaign, discovered that his real passion lay in the arts and decided to pursue it. Has Directed and Acted in a Tamil/English Bilingual called Ticket with a slew of talented actors and technicians from Chennai. This is
Raaghav’s directorial debut. This film premiered in the London Indian Film Festival 2017. The commercial release of this film is expected to be in August/September of 2017