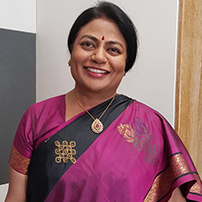 Mrs. R. Vimala completed her initial education from Bhusaval. A brilliant student, she stood third in the merit list of the HSC board examination and topped her B.A. from the University of Pune. Having an interest in History, she completed her B.A., M.A. and M.Phil with specialisation in History. 2. Starting her career as a Lecturer in the Department of History, University of Pune, she taught Modern Indian History & Medieval Indian History to Post Graduate students between 1992-1993. 3. Ever since her foray into public service in 1993, Mrs. R. Vimala has served in several positions, which have been an interesting mix of management and administration. She has been Joint Managing Director of Small Scale Industries Development Corporation and Film city as also Deputy Commissioner for Entertainment Duty and Rehabilitation of Project affected persons. She has also worked as the Joint Manager Director of Dadasaheb Phalke Filmcity also implemented the MGNREGA / EGS as Deputy Secretary to the Government of Maharashtra. Elections land acquisition are some of the fields in which she has specialised. 4. She has over 25 years’ experience in various department of the government and has contributed significantly to public welfare schemes. IAS officer, Mrs. R. Vimala is currently posted as the Chief Executive Officer of Maharashtra State Rural Livelihoods Mission in the Government of Maharashtra and works for the empowerment of women in Rural Maharashtra. 5. As Chief Executive Officer, Maharashtra State Rural Livelihoods Mission under the Department of Rural Development, she is working for the empowerment of women through self-help groups. She propagates ‘Dasha Sutra’, the 10 cardinal principles for social and economic development. She has been instrumental in creating more than 2 lakh self-help groups and associating over 30 lakh families in 34 rural districts of Maharashtra. She has facilitated generation of sustainable livelihoods for over 5 lakh households and over 3 lakh women farmers with a turnover to the tune Rs.500 crores. She has liaisioned with banks for linkages of for the self-help groups over Rs.4000 crores. She is also in charge of skilling rural youth through Deendayal Upadhyay Grameen Kaushalya Yojana and has facilitated skilling of over 23000 youth and placing over 10,000 youth in jobs. She is a blogger by the name of Heart’s content @ vimshine.blogspot.com