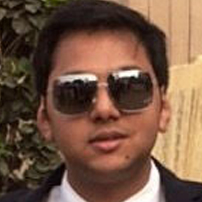 Purusharth Goel scored a 96% in 12th and is a CBSE merit certificate holder in Mathematics (100% in Class 10th) & Accounts (99% in Class 12th). He was the Prinicpal’s Awardee at Modern School Barakhamba. He graduated from the prestigious Shri Ram College of Commerce in B.com (H) with a distinction. (80% Aggregate). He developed a profitable loyalty and discounts platform (The Paisa Card) at the age of 18 and sold the company by the age of 20. Paisa card had 30,000 paying users (students) paying a $1 per semester. Subsequently founded a Foodtech startup (Foodzilla) that was acqui-hired by Oxigen at the age of 23. He joined Oxigen as Executive Assistant to the CEO. At Oxigen, he’s now managing strategy and investments. Oxigen is in the middle of a fundraise to expand its network for financial inclusion and distribution of financial services to 150 Mn customers via 100,000 retailers. He also heads next phase growth initiatives for the Oxigen Group such as lending (BaseSix) to oxigen network and the accelerator program (Aarambh Ventures) promoted by the founder of Oxigen, Pramod Saxena.