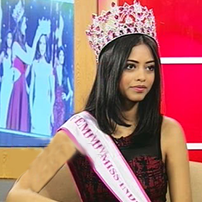 Priyadarshini Chatterjee is an Indian model and beauty pageant titleholder who was crowned Femina Miss India World in 2016. She represented India at the Miss World 2016 pageant. She is the first to represent India at Miss World from a northeast Indian state. She made it to Top-20 semifinalists and top-5 Beauty with a Purpose early life She was born in Dhubri in a Bengali family and was brought up in Guwahati city in the state of Assam She completed her schooling in Maria’s Public School in Guwahati and moved to New Delhi to pursue higher studies. She is currently pursuing her bachelor’s degree from Hindu College, University of Delhi.
Modeling and pageantry While pursuing education in New Delhi, She started a career in modeling. She has done many modeling assignments by working as a freelance model. In 2016 she won the title of Femina Miss Delhi. Which gave her a direct entry to participate in Femina Miss India 2016, where she won the title of Femina Miss India World 2016.