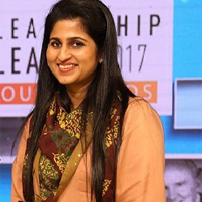 Priti Poddar Goel is the founder of Nurturing Young Seeds, with which she embarked on a journey to give experiential learning to students in various professions. Being brought up in Singapore, this came from a different school of thought. She is passionate about working with kids and want to empower them with the wings to Dream.
NYS also launched its first NYS Leadership League 2017, a pan India Inter School Competition which was a huge success. Students all across India participated in the competition. Leadership League promoted Entrepreneurial Leadership and Social Entrepreneurship. The show was also broadcasted on Zee News, Zee Hindustan, Zee MPCG, Zee Salaam, Zee Rajasthan and Sadhna Channels.
She has been a Guest Speaker at numerous School MUN Meets and Chief Guest in a number of eminent schools.
Mrs. Priti Goel has received training under the Vice chairperson of Essel Group- Mr Jawahar Goel for 10 years and hence she has copious exposure of the different corporate environments that fall under the Essel group.