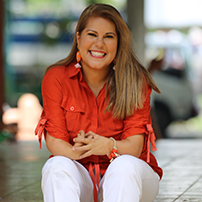 CEO – Founder of PSC ATTORNEYS and PSC COACHING, Founder of political party Partido Cantonal de Carrillo, President of the Party and candidate for Mayor, Doctor of Law, president of the Guanacasteca federation of people with disabilities, Former President of the Chamber of Tourism of Guanacaste, lawyer and doctor of law graduated with honors. Master in
Georgetown University and PAHO at: Negotiation, International Health and equity. Graduated from the Master in Public Health. Diploma in Administration of companies, domain of four languages, executive coach and member of Women Latin American leaders in INCAE. Vice President of SHEIS FUNDATION in Costa Rica. I have worked as a consultant for the United Nations and as an advisor
honorem of the Presidency of Costa Rica, on issues of social inclusion. Community leader, international speaker and international advisor on issues of leadership, negotiation, gender, entrepreneurship and female empowerment. “I know that power is in strategy and knowledge, that’s why in my walk I focused on exercising them ”