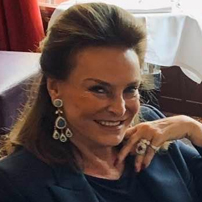 Graduated from E.D.C. Paris in Finances and Economy.

1977 Birth of her daughter Princess Christine.

2002-2004 President of the Committee of “The Friends of Princess Margarita Of Romania Foundation”. Special mandate to organize a huge event in Geneva in favour of the “Inter Generation Center” in Bucharest.

Fulfilling the role of President of “Heart For India” : Working in the fields, managing all the programs which have been created from A to Z.

The Heart for India Foundation is fully recognized in India as an example of cooperation and success.

Recognised as a “Model School” for all India and Bangladesh, the Nanmangalam School, which is financed by Heart for India, is one of the examples of the Heart For India’s work.

2009 Recognition by Winning in New-Delhi, the Award of “Global Citizen” given by ICONGO (Indian Conference of NGOs).

Feb. 17 Ms. K. Hema; teacher at Amman Nagar supported by Heart for India has been awarded Best Best Anganwadi teacher by the Tamil Nadu Govt. Ms. Hema conveyed her gratitude to Princess & the Heart for India Foundation team for having selected the Amman Nagar Balwadi & having rendered all the support to this day. “Without the intervention of HFI this would have yet remained a dream”.

Speaker at Namaste Geneva – co organized by his Excellency Rajiv Chander the Permanent Mission of India to the United Nations office and the WIPO – SWITZERLAND.

2019 Recognition by Winning in New-Delhi, the Award of “Global Citizen” given by ICONGO (Indian Conference of NGOs).