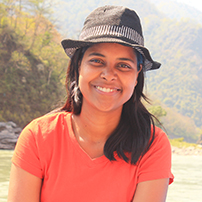 After working as a journalist for 7 years, actively volunteering for Anna Hazare movement since its inception and leading ground campaigns for the Aam Aadmi Party till 2015, I realised that corruption is not the biggest problem. The biggest threat is the unstoppable environment pollution. And, this is when I decided to start ‘Ecoplore’. My experience as an activist made me realise that if you really want to bring a change at the mass level, you have to involve the masses. And, money is something that binds everyone. So, any big change has to be connected around money. So, Ecoplore is a social entrepreneurship that aims to limit the environmental damage by reducing the construction of ugly concrete buildings and increasing the no of eco-stays.
As a journalist, I started my career at CNN-IBN, then moved to ‘Headlines Today’, then worked with a Japanese news agency and with a renowned French photographer on a photo book on Delhi NCR.
Few chapters of my life have also been documented in the book ‘Love@politics’.
‘Ecoplore’ has received several accolades. Few of them are:
* Selected for ‘Women Get Funded’ fellowship by a Silicon Valley based investor
* Received a grant by WEE Foundation, IIT Delhi, Niti Ayog and Department of Science and Technology, Govt of India
* Chosen by Smart Fifty IIM Calcutta Innovation Park
* Exhibited at IKMC Knowledge Park, Hyderabad
* Speaker at Jamia Milia Islamia University, Department of Innovation & Entrepreneurship
* Was interviewed by She the People TV and the video received one of the maximum views with around 300,000 people watching it only on Facebook
* Shortlisted for Outlook Traveller Responsible Tourism awards 2019
Apart from this, I initiated the environment movement against the cutting of 50,000 trees in South Delhi for the NBCC and CPWD redevelopment projects. We did day and night patrolling to protect the 100 year old trees, organised several protests, filed police complains, met government authorities. And, finally with our persistent effort, penalty was imposed on CPWD for killing a tree thus sending a very strong message to them to not kill other trees. Also, the debris put on several big trees were immediately removed and it was an achievement for us to see the trees breathe again. The project is on halt right now. Our fight is on and we will continue to oppose the wrong policies till the govt changes its decision.
So, the vision to protect the environment is being nourished both through entrepreneurship as well as social leadership.