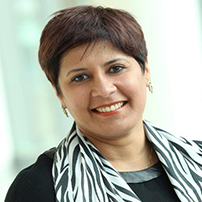 Pratima a result driven executive with total work experience of 17+ years across several countries with top notch Financial Institution like ABN AMRO and ING She started her career with IT multinationals in diverse roles. She has lead and supervised teams and managed multi-million euro programs. She has strong hands on experience in IT, Procurement, Regulations, Compliance (Anti Fraud, Anti Money Laundering, Anti terrorist Fianancing) & Operational Risk. Her career in the corporate world focussed on leading multiple & complex technical and operational program involving large number of stakeholders. She is known as a dynamic change agent who possess immense enthusiasm and ability to interpret strategies to make them operational and effective. She was top talent within ING and has been recognized with awards & recognition from almost all her employers.
In 2015 she founded Stichting OFBJP ( Overseas Friends of Bharatiya Janata Party) on the philosophy of Vasudhaiva Kutumbakam, which means “the world is one family. OFBJP is a global network with chapters in 40+ countries and is considered as one of the biggest Indian Diaspora organisation in the world. She was appointed as Convener to promote Prime Minister Narendra Modi’s vision on Unity&peace and Strengthen Indo Dutch friendship. Stichting OFBJP is a non profit organisation working to help Indo Dutch community in the Netherlands. Last year OFBJP launched the Elderly Program to contribute to Dutch Society problems.