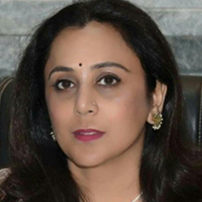 Mrs. Pratima Gupta, the person that Sunbeam Group associates with dynamic group leadership with care for all, has been instrumental in bringing in number of changes in the pedagogy and theology of Sunbeam Group. She has a lot as her contribution in making ‘school’ so interesting for little kids…in making teachers such an enthusiastic lot…in making the school environ so ripe with spree of spontaneous ideas and experiments that spark excitement among teachers and the taught.
Being the daughter of an Army Officer, Mrs. Gupta was brought up in a home that worshipped discipline & honesty as a religion which, in turn, can be seen very much in her work culture. Hailing from an Army Man’s family, she had the opportunity to mingle with people of different culture, religions and languages which gave her a rich bank of understanding people. Her affinity to languages finally made her into a brilliant orator which is now a boon for the institution she works for.
She always had a Gold Medal to her pride throughout her journey of education starting from her schooling from KV Indore to higher studies. After completing her BA in English Literature from Devi Ahilya University, Indore, she pursued her MSW in Psychiatric Social Work from Indore School of Social Work followed by an M Phil in PSW from NIMHANS, Bangalore. She then did a Post Graduate Diploma in Psychological Counselling from the Annamalai University.
Having psychology and psychiatry at the core of her heart, Mrs. Gupta has been able to introduce a completely different perspective in understanding problems of the adolescents and in establishing understandable connect between youth and their parents. Sunbeam has benefitted largely out of her diverse experience of understanding pupils vis-a-vis the ever changing and growing environ they belong to.
Having started her career as a Freelance Counsellor, she served as the Centre Head in National Institute of Fashion Design, Indore for two years before moving into the Sunbeam Group of Educational Institutions, Varanasi as the Assistant Director of the Group in the year 2001.
A certified Internal Auditor for Inspection of ISO 9001:2000 systems by NQAQSR, she is also a Certified Quality Circle Trainer by Jenny Mosley Foundation, U.K. and Teacher Training Foundation, Bangalore. She has been part of several seminars and workshops including Exercising leadership in school by idiscoveri, New Delhi.
When not engaged in serious business of life…she loves writing, reading, travelling and exploring music genres…as her favourite pastime.
As part of her professional interest, she has taken several workshops with students, teachers and people of heterogeneous interest groups on various subjects, viz, Communication Skills, Stress Management, Identifying Problem Behaviour in Children/Adolescents, Critical Thinking & Problem Solving, Leadership & Team Building, Values & Ethics at Workplace, Manners, Etiquette & Grooming etc.
She has been a panelist on various platforms such as Annual Leadership Conclave, Goa 2019, Eduexcellence Carnival at IIT Delhi, Education Today Conclave, Brainfeed Thought Conclave etc. She has recently been nominated as a Resource Person by CBSE.
As the goal of her career she aspires to bring about the best fit between individuals and life situations by mentoring / coaching them in socio-emotional skills needed for the same.