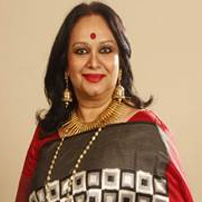 Padmasri awardee Prathibha Prahlad is a highly respected performer, choreographer, author, scholar, arts administrator & Guru. With indefatigable energy and passion, Prathibha Prahlad has pioneered India’s most prestigious arts festival – Delhi International Arts Festival. Her innovating efforts in creating India’s Signature Arts Festival, DIAF, has given a new dimension to India’s cultural footprints globally. A renowned culture specialist, she is a frequent invitee to international conferences.
Prathibha Prahlad heads the Prasiddha Foundation & Forum for Arts Beyond Borders, both of which she has established into premier cultural organizations of the Country. Prasiddha Dance Repertory, of which she is the Artistic Director, is frequently invited by International Festivals for performances. She has served extensively on several Government of India Committees on culture. As the convener of the Culture Committee of Commonwealth Games 2010 & designed the Opening & Closing Ceremonies and has served as a member of the Jury for National Film Awards and Dada Saheb Phalke Award. She has also designed the syllabus for dance for NCERT and contributed to MHRD’s Master’s degree program online. She is the only artiste of her generation on an Indian ‘My Stamp’ of Rs.5, released by the Dept. of Posts & Telegraphs, in her honour. Prathibha Prahlad has been conferred the PADMASRI & Sangeet Natak Akademi Awards. She has received the Karnataka State Government Award & ‘Karnataka Kalasri’.Prathibha Prahlad says -“Culture is the wealth you pass onto future generations. It is our identity and is the only truly unifying force in this divisive world. It is our collective responsibility to invest in culture”