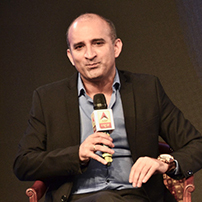 Prasad is simply an unstoppable innovator. From solving the most complicated technical problems, to making India’s most commercially successful animated movie, he is not just a dreamer- he’s a doer. Prasad’s unique and innovative ideas to revolutionize the multimedia industry and digital businesses, don’t just remain ideas, he brings them to fruition with his constant determination and enthusiasm. His personality is mirrored in the iRealities culture and successes. Since the past two decades, Prasad and the iRealities team have worked with leading companies, including Unilever, Procter & Gamble, Siemens and Microsoft on hundreds of successful projects. Prasad has actively participated on several platforms related to small and medium enterprises, and has mentored start-ups across various industries. Prasad is an advocate for various social causes, and an advisory board member for multiple corporations and entrepreneur projects.

Prasad is relentless in his pursuit of one-of-a-kind, impactful business strategies and solutions. His strategies aren’t merely formulated on creative whims, he ensures that the strategies he puts forward are grounded in fundamentals. Prasad will formulate a strategy or solution only after carefully considering how it will impact the client and all other stakeholders involved. Empathy and the practice of stepping into various stakeholders’ shoes is something Prasad ensures that the entire iRealities team follows.

Prasad is not only passionate about delivering effective business solutions, he is also passionate about the animation and entertainment industry. In 2016, Prasad enthusiastically worked closely with the iRealities team to produce ‘Chaar Sahibzaade’- the first ever Indian animation movie to cross 75 crores. Other successful movies and television serials Prasad has worked on include Bird idol, Antariksh, Raavan and Sheikh Chilli.

As a boss, Prasad is humble, progressive thinking, entertaining and welcoming to the entire iRealities team. Regardless of a team member’s level of seniority at iRealities, Prasad makes them feel valuable in their contributions, whether they are interns or senior-level managers. Employees are provided with an environment where they are encouraged to openly express themselves and their ideas. (attach URL to Prasad’s LinkedIn).