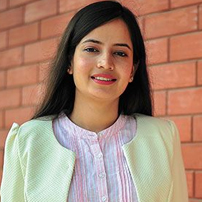 Pranshu is the co-founder of Hello English, Asia’s most downloaded educational app. Hello English has over 40 million learners learning English from 22 vernacular languages. The App was felicitated by the IAMAI Best App Award in 2017 and Google’s Editors’ Choice Award 2017. Hello English was also chosen by Google as ‘Best of 2016 Apps’ based on its popularity and ability to keep the users engaged through its content. Pranshu won Facebook’s She leads Tech award in 2017, and was part of the Forbes India 30 under 30 list in 2015. Prior to Hello English, Pranshu worked with Pitney Bowes in leadership positions across strategy, program management and financial planning. She has also worked with Sun Microsystems. She is a double gold medalist from NMIMS, Mumbai with degrees in Engineering and MBA.