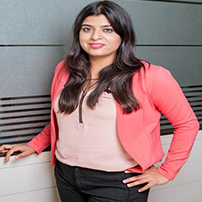 “Music and movement can bring about change, if we change the way we look at music and movement.”
This singular motivation unites the multiple roles Pragnya Wakhlu plays as professional musician, sound alchemist and as founder of Mousai. Her passion for working with music and people led her to quit her successful career in I.T. in the U.S. and return to India to delve into research on the healing powers of music & movement. Pragnya founded Mousai India in 2009 after extensive experiments and research on the effects of sound and movement on the body-mind. Since 2009, Mousai has been facilitating transformative sound and movement workshops for AIDs patients, women, children ,schools and corporates .Mousai has been featured in the book “Inspiring Women to start Innovative Enterprises” and on Techstory India.
Pragnya completed her advanced Indian sound healing course under the guidance of Indian sound healer Shruti Poddar where she learned about the ancient healing powers of Vedic sound and mantras and their effect on the human body-mind. She completed her Tibetan bowl practitioner certification under the guidance of Russian physicist Vladimir Skaska. She holds a Level 2 Certification from the ‘Training in Power ‘ Academy USA .She is a certified Interplay Trainer(U.S.A) and is a member of the Creative Movement Therapy Association India She completed her advanced sound healers Tibetan bowl practitioner course under the guidance of M.V. Priyank, an exponent of sound healingShe is a Certified Coach from the American Fast Track Coaching Academy , U.S.A
As a Musician
Pragnya is an award-winning musician, composer and activist. A strong believer in using the power of music to promote positive change, Pragnya’s work is heavily inspired by the many important
issues she is passionate about. Pragnya’s two critically acclaimed albums “Journey to the Sun” and Kashmiri-English fusion album “Kahwa Speaks” have won many awards for India including the Best Genre-Bending Song, Best Female Act at the South-east Asian VIMA awards 2019, RadioCity award for Best Folk-Fusion Album (2018), Barclays Rising Star Award (2016), Best Music Debut, Best album , Best Pop Song nominations at the GIMA awards.