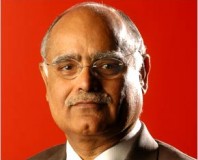 Chawla did his education in Delhi and studied economics at Delhi School of Economics. He started his career as an economics lecturer in Delhi Univesity.

One of India’s finest political journalists, Chawla is known for his sharp political analysis and investigative reports. In his 40 years as reporter and editor, he has written extensively on events that changed the political course of India and people who engineered them. He is credited with launching the regional editions of the India Today magazine in Hindi, Tamil, Telugu and Malayalam. He has hosted a weekly talk show ‘Seedhi Baat’ on Aaj Tak, India’s most popular television channel.

He was awarded Padma Bhushan by the President for 2003. He has also won several national awards including The Hero Honda-Indian Television Academy (ITA) Best Anchor award for `Seedhi Baat’ 2005; TV News Anchor of the year – Telly Awards 2003; TSR Kalapeetham Life Time Achievement Award for 1998; the GK Reddy Memorial Award for investigative reporting and current affairs-1989; and the Feroze Gandhi Memorial Award for excellence in journalism 1985-86.

Today he is one of the most authoritative and credible voices in print as well as the visual media.