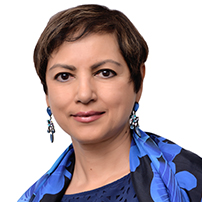 Prabha Chandran has been an editor with some of India’s leading newspapers and has written extensively on current affairs and lifestyle issues through the 90s pioneering several lifestyle publications both online and offline.
Since 2002, Prabha has been working internationally mostly with the World Bank on a series of specialised communications projects.

She implemented the national information campaign for the first population census of the newly-independent nation of East Timor for UNFPA and the huge reconstruction program by the World Bank in Indonesia following the tsunami of 2004. She has worked closely with senior government officials, donors and international media in many Asian countries, managing strategic communications for large World Bank projects and senior management
She has also lived and worked on development communications in Hanoi, Belgrade, Bangkok, Kuala Lumpur and Nairob. She has a lot of experience working in post disaster, post conflict areas and mentoring national communications staff.

Prabha divides her time between her homes in Oslo and New Delhi where she plans to work more directly on women’s issues particularly in support of the girl child. She is married to Olav Ofstad, a conflict management specialist from Norway and has two sons. She writes, cooks for friends and loves travelling in her spare time.