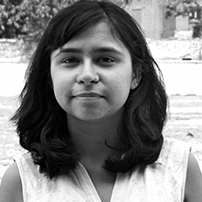 An Educator by profession taking keen interest in the creation of spaces which are dialogically open to multitudinous Art forms in order to analyse their role in unfolding the sentient lives of the students she encounters, Ms. Ahuja also seeks to develop herself and her students holistically by a persistent appraisal of the role and means of inclusion of Philosophy and various Art forms in envisioning and reshaping Modern Education.

As a being actively engaged in continuous evolution of Self, she has ventured into various Art forms, in a relentless attempt to develop a lens through which both the metaphysical and the tangible realms of the ever-transmogrifying blend of poetry and philosophy may be harnessed. An ardent admirer of Experimental Cinema wherein the dialogical exchange displays enormous possibility of exploration of one’s values and the Ethos of the Society, her primary area of scholarly and pedagogic research involves to envisage the peaceful co-habitation of presumably dialectical forces, attained through the practice of patient listening and wholesome speaking. Emphasizing upon the indispensible role of learning from one’s experiences in the field of Education, she encourages that her classroom, a microcosm of the Society, is a prejudice-free space facilitating the learners to bring the contexts they inhabit and the experiences they have to the classroom to foster a deeper connection and an everlasting relationship with the literary text, their own selves and with their peers.