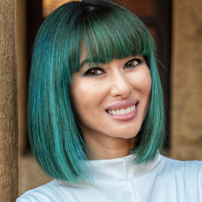 Phu Styles is the Founder of Women in Blockchain Foundation, CEO of Blockchain PR, Co-Founder of Startup Villas, and a Venture Partner. She is also an Advisor for several companies including Serve, Vezt, Snowball, HK EOS, & Blockchain at the University of California, Irvine.
Prior to her transition into the tech industry, Phu began her early professional career as young Cognitive Behavioral Therapist while studying at UCI. A few years later she co-founded a children’s yoga company as an extension of her already thriving CBT practice. Shortly after, her career took a creative turn when she became an international award-winning Celebrity Fashion Stylist. Although she enjoyed working with high profile actors like Ryan Gosling and Michelle Rodriguez, the Futurist in her had always been interested in technology & self-optimization. In 2015, Phu transitioned into the tech industry by co-founding a VR startup. In 2017, Phu was awarded the Female Founder Fellowship from Founder Institute and founded an Augmented Reality startup before joining the Blockchain & AI revolution.
As a Philanthropist, Phu sits on several boards such as the Electronic Music Alliance and Green Wave, mentors for organizations including Children’s Hospital LA and Dress For Success, and is also a TedX Co-Organizer.
As a Thought Leader, Phu and her work have been featured in Business Insider, Forbes, Elle, Cointelegraph, Hackernoon, America’s Next Top Model, Dancing With The Stars, FOX News and CNBC to name a few.