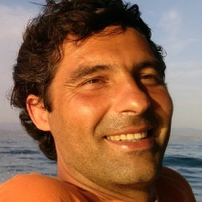 He cherish exploring his evolution as an individual through making contact with different people, cultures, philosophies, arts and technologies. This has lead his to develop in a very diverse and intense way, both personally and professionally. On the way he has gathered many different skills that are transversal to a variety of areas of knowledge, performance and interaction. On my constant philosophical quest, he initiated my exploration of Astrological studies in 1990 and his music practice in 1991. In 1994 he begins his higher education in Psychology and ended the course in 1999, which is the same year He came to know of Quiron – the Portuguese Centre of Astrology. He then started what would come to be a 7 level course in Transpersonal Astrology under Maria Flávia de Monsaraz’s guidance. Also in 1999, He came across Yoga and have been practicing it, though irregularly, since then. In 2003 I started practicing meditation when He attended a Buddhist meditation course. Between 2003 and 2012 He was worked as a business consultant for companies working in the professional training field and also worked as a trainer in the behavioral and computing areas. He has been working as an Astrologer through his Atropsychological and Transpersonal sessions since 2004. In 2015 He became a certified numerologist, coach and intuitive quirologist, adding these skills to his sessions. At the moment, He study and practice astrology, numerology, meditation, writing and bee-keeping. He also teaches Astrology courses and consultant in some small companies.