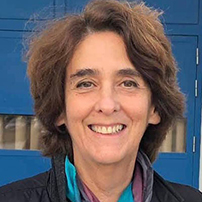 Paula Sobral – AssociateProfessor at the Department of Environmental Sciences of FCT- Universidade NOVA de Lisboa.
She has developed research in marine litter and microplastics since 2008, and coordinated national and international research projects on the topic. She has published several scientific papers in international journals and has collaborated with other universities about the issues of marine litter and microplastics. In 2013, she founded the Portuguese Marine Litter Association an engagement platform for multiple stakeholders, and since then has developed and promoted numerous awareness and co-responsibility actions to reduce marine litter and achieve Sustainable Development Goals.
She is the Portuguese Science and Technology Foundation designated expert for microplastics, has collaborated with the Portuguese Environment Agency and other government bodies onto the implementation of the EU Marine Strategy Framework Directive and is also a member of GESAMP– Group of Experts on the Scientific aspects of Marine Pollution, currently involved in the UN 2nd World Ocean Assessment.