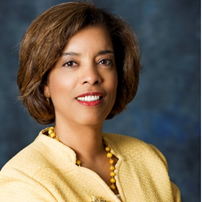 Pamela Trotman Reid, Ph.D., Senior Scholar for the Merrill Palmer Skillman Institute for Child and Family Development at Wayne State University, is also President Emerita of University of Saint Joseph (USJ) in Connecticut where she served as president for nearly eight years. She has a broad and successful background in higher education with more than thirty years of progressively responsible management assignments, experience as a professor and researcher, in addition to community service, and engagement in organizations devoted to the advancement of psychology, women and girls.

With her career progression from assistant professor to full professor, Dr. Reid has served at a variety of public and private institutions. She taught psychology, education, and women’s studies at doctoral institutions (University of Michigan, City University of New York, Howard University, Drexel University, and University of Pennsylvania), comprehensive institutions (University of Tennessee-Chattanooga, College of New Jersey) and at Philadelphia Community College. Her administrative positions at UTC, CUNY, and at Roosevelt University also included department chairperson, associate provost and dean to provost and executive vice president, and ultimately to president at the University of Saint Joseph. This progressive advancement through the ranks permitted her to oversee every aspect of the academic enterprise with particular responsibility for strategic planning, as well as for budgetary and personnel decisions.
After assuming office in January 2008, Dr. Reid built upon the University of Saint Joseph’s academic excellence and its commitment to integrity, women’s leadership, and service. During her eight year term as President USJ grew in reputation, visibility, and size. The student population increased approximately 38%, full-time faculty grew by 60%, and the university’s operating budget doubled. Her administration’s successes included record setting fundraising efforts and enhanced statewide recognition in media and government venues. She initiated and successfully launched the University’s first professional doctoral program by creating a School of Pharmacy, Connecticut’s first private school of pharmacy. A doctoral program in Nursing

Practice and the Master of Social Work were begun under her leadership, as well as undergraduate programs in Public Health, Public Policy and Advocacy, and English as a Second Language. The university’s online graduate programs continued to flourish with her support and student exchange agreements with universities in Japan, Oman, and Israel were established.
Dr. Reid’s commitment to the community earned numerous honors, including being named Northeastern Economic Development Association’s Higher Education Person of the Year. Her service on multiple civic and cultural boards in the Greater Hartford area included an appointment by CT Governor Malloy to the Capital Region Development Authority, and chairmanship of the executive committees of the Connecticut Conference of Independent Colleges and the Hartford Consortium for Higher Education. At the national level she served on the board of National Association of Independent Colleges and Universities (NAICU), the National Collegiate Athletics Association (NCAA) Presidents Council for Division III. She currently serves on the American Psychological Association’s Publications and Communications Board and is actively engaged in the Michigan chapter of the International Women’s Forum (IWF).

A developmental psychologist, Pam Reid is nationally-known as a scholar in the area of gender and racial socialization. A Fellow of the American Psychological Association (APA), a past President of the APA Society for the Psychology of Women. Named among the 100 Distinguished Women in Psychology, she has received national awards for leadership, scholarship, and publications.
Dr. Reid holds a B.S. from Howard University, an M.A. from Temple University, and a Ph.D. from the University of Pennsylvania. She has held faculty and administrative positions at the City University of New York Graduate School, the University of Michigan, the University of Tennessee at Chattanooga, and Roosevelt University. She is married to Dr. Irvin D. Reid, Distinguished Professor and President Emeritus of Wayne State University in Detroit. They have two adult children and three grandchildren.