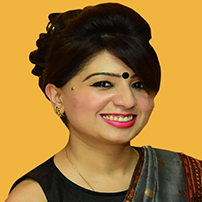 Pallavi Chumki Barua is a lawyer, filmmaker, social activist and food connoisseur.
Since her college days academics has been her driving force and has been appreciated for the same. When she was completing her higher secondary education from Cotton college she was awarded a certificate for academic excellence.
She is a First Class Law graduate from I.L.S Law College Pune with a Master’s degree with distinctions in her Specialization and merits in Intellectual Property and Arbitration Laws from University of London (External Studies). In addition to this she is also equipped with diplomas in Taxation Law, Cyber Laws, Special Corporate Laws and Human Rights. While pursuing her law she was a merit list holder at the Pune University. As a student she had assisted in drafting the bill on “Sexual Harassment of Women at Workplace” which later became an Act in April 2013.
After graduating from I.L.S in 2003, formerly she started her career as a practicing advocate in the Supreme Court of India and later after tying the knot, she moved to Guwahati High Court in 2006. She is 38 years of age and bags in an experience of 14 years as a Corporate and Intellectual Property rights lawyer and is based out of Guwahati and Kolkata.
She has been actively involved in social activism. In 2011, she co-founded a social work organization in Assam by the name UTSAH (Universal Team for Social Action & Help), a prominent NGO that works extensively on Women and Child Rights. From 2011-2014 she was the Vice-Chairperson and Executive Director for UTSAH where she played a phenomenal role in women empowerment, particularly in slum and marginalized communities. She has also received an Award for Outstanding Contribution to Society and has also appeared on National Television & local radio channels as panelist for discussions on women issues.
She is a member CII-Young Indians, a pan India voluntary organization engaged in nation-building activities and has been in the Yi National Governing Council for past three years looking after the YUVA vertical which primarily engages in encouraging and promoting Student leadership in Colleges. She is the incoming Regional Chair of North East India for Yi.
While as a profession she practices law through her firm PCB Legalis, she also passionately engages with the world of Cinema and Theatre. She has been actively associated with the theatre scene in Guwahati and is a member of the organizing team of Guwahati Theatre Festival.
Rishang- The Warrior of Love, was the first feature film under her production banner Ruby Visions which had won the Most Popular Film Award in 2012 at the Prag Cine Awards. She is also a member of the Organizing teams of Brahmaputra Valley Film Festival and helps in promoting Young talents from the region. She is also a food enthusiast and has been actively involved in evolving the food scape of Guwahati. She is at present the Director of GPlus Guwahati Food Awards”.
Pallavi had to undergo the storm of her husband’s sudden demise in March 2017. After her husband’s death, she took the reign of her husband’s construction firm named Frontier Engineering, which is one of the oldest construction firm in Assam. Frontier Engineering has constructed many prominent properties like Assam Valley School, International Hospital which is now Apollo Hospitals, Numaligarh Oil Refinery, Guwahati Public school and several road, bridges and irrigation projects etc. She is now a special invitee to the board of Apollo Hospitals, Guwahati. Pallavi has retained all the employees of her Husband’s construction firm with her win back approach. Her aspiration towards making a better society and fulfilling the dreams of her beloved late husband has led her to build a TRUST by the name of Bob Barua Benefaction.
It is needless to say that she is an inspiration to many women and her win out attitude has always been one of the key factors to make her what she is.