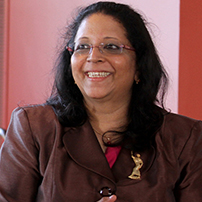 Dr. Padmini (Mini) Murthy is a Professor and Global Health Director at New York Medical College. She is a physician and an activist who did her residency in Obstetrics and Gynecology. She has practiced medicine and public health for the past 28 years in various countries. Dr. Murthy serves as the Medical Women’s International Association NGO representative the United Nations and VP North America .She is elected fellow f the New York Academy of Medicine, American Medical Women’s Association and The Royal Society of Public Health.
She has been in leadership positions in the American Public Health Association, Eleonor Roosevelt Foundation at Val- Kill USA.
Dr Murthy currently serves on the executive committees of united Nations NGO Commission on the Status of Women Committee, NY, NGO Committee on the Department of public Information at the United Nations.
Dr Murthy has served as a consultant to the United Nations . She has played key role in first UN conference held in Australia as U.S. representative for conference. Orchestrated conference, secured speakers, coached community of experts, and moderated high-level panel discussion on public health as co-chair of expert committee for UN Department of Public Information Annual NGO Meeting, Advance Global Health: Achieve the MDGs.
She has been Host and Script writer for Radio show on Millennium Development Goals on African Views Radio.
Dr. Murthy is widely published and is the author and editor of Women’s Global Health and Human Rights. She is currently working on her 3rd book which focuses on the use of Technology in the Practice of Public Health She has made over 125 presentations on women’s and children’s health nationally and internationally She has been working to promote safe motherhood and other health initiatives focused on women in India, Malawi and Grenada and Nepal. Dr. Murthy has worked with the former first lady of Malawi in promoting safe mother hood initiative in Malawi by spearheading a campaign to collect safe mother hood kits and funds to build a safe maternity waiting home. She has partnered with Zonta International and to date has been instrumental in supplying 5,000 safe motherhood kits to help women in India, Malawi, Nepal and Grenada.
She has been s appreciated for her efforts in helping the women of Grenada by the Governor General of Grenada. Murthy has been at the forefront in designing on line educational programs to promote global health.
She has been invited as a keynote speaker to present on women’s health and human rights at various Universities, United Nations countries and international conferences. Dr Murthy has been acknowledged as a motivational speaker and students from some of the universities she has presented have adopted the safe mother hood campaign and collected supplies to assemble safe mother hood kits.
Dr. Murthy has worked with her students to raise supplies for Liberia after the aftermath of Ebola.
She has been the recipient of Jhirad Oration Award, which was given in recognition of the service provided to an organization and was presented this by the Medical Womens International Association.
She has also been the Soujouner Truth Pin which is given to those women who excel in community service. This award was presented to her by The National Association of Negro Business and Professional Women. In March 2016 Murthy was awarded the prestigious Blackwell Medal by the American medical Women’s Association (AMWA)and is the first Indian born American to get this honor since its inception since 1949. She received the Millennium Maker Award in China. Dr Murthy has been the recipient of The Soujouner truth Pin which is given to a woman who excels in community service. This award was bestowed on her by the Negro Association of business and Professional Women She has been the recipient of the Marie Catchatoor Memorial Award ( 2013) Dr Lata Patil Inaugural Oration Award, ( 2016) Dr Homi Colabawalla Oration Award ( 2017) given to her by the association of Medical women in India for her role in promoting women’s health and human rights globally.
Dr Murthy is married to a physician and is the mother of a daughter who works in International development.