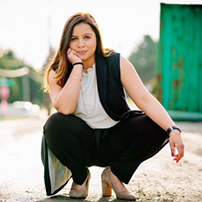 When Paarull JS Bakshi meets a person, her mind automatically starts analyzing how she can enhance their image by highlighting their best features and skills. Whether the person is an entrepreneur or an artist, she knows how to present them (in the best way possible) to the world, especially their audience.

Born to a successful father, a renowned name in the Shipbuilding and Maritime industry, Bakshi knew from the very beginning that she would have to work hard to build her identity as an independent woman entrepreneur. She still remembers what her grandmother told her as a little girl, “Either you be the best at what you do or don’t do it at all.” These words have been her guiding principle since. Her grandmother was a prominent English literature professor at Delhi University.

Even as a post-secondary student, Bakshi always had a keen interest in helping small businesses. At the time when most people her age were busy making friends, she was working hard to achieve her career goals.

She is a CHANGEMAKER, an IMAGE CONSULTANT, a BRAND BUILDER and an ENTREPRENEUR — all rolled into one. Her sharp eye for detail, her vision for style and brand transformation, and passion for entrepreneurship have made Bakshi a known and trusted name in the South Asian community. Always the student, Bakshi follows business trends and leaders and has been a regular columnist for some prominent South Asian and business publications. She has also appeared on television several times as a special guest.

Despite all her bold decisions in life, Bakshi is rather a shy person and likes to stay behind the scenes. Her work speaks louder than her words. She has successfully transformed the looks and public perception of her clients, ran their PR campaigns and secured editorial space for them in respected local and national publications and television channels.

The results of her work are known and seen by the community but many may not know that she has been behind her client’s transformation. Bakshi has been instrumental in the public image transformation of successful businessman Perminder Chohan and building a his personal brand and branding for his philanthropic organization, the Perminder Chohan Foundation .

Bakshi and her team have worked round the clock for some of her clients, when needed. Her team comprises successful artists who are as passionate as her about their work.

Over the years, Bakshi has worked her PR and brand building magic for clients like Astrologer Sanjeev Katoch, Dr. Larra Shah, who is a well-known Holistic Healer from Bollywood, the Vancouver International South Asian Film Festival (VISAFF) and other successful -ntrepreneurs, politicians and artists. She has worked behind the scenes at large events with celebrities like Gulshan Grover, singer Jazzy B, musicians Madan Mohan Gopal and Chaar Yaar, and Sufi King Satinder Sartaaj. Recently, she worked with Youtube sensations and comedy stars from Mumbai — Rahul Subramanian and Kunal Kamra and most recently with superstar Govinda. For Bakshi, promotions are fun and she wouldn’t have it any other way.

She is known in the community for her work, especially the way she carves one’s personality to the public and audience. She is camera shy like many creative people. “I want to continue to build others public image in a way where their art, their skills and their talents are noticed, in the best way possible, and it makes them more confident in themselves,” she says.

In a world, where most people have to struggle to create a path for themselves as entrepreneurs, Bakshi has created a business that many only dream about. Her honesty, drive for perfection and persistence in achieving her goals make her a dependable problem-solver for many in the community.
Image is Crucial so let us help build it – Paarull JS Bakshi – Paarull Communications Ltd. https://www.paarullcommunications.com/