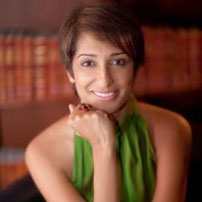 Otara Del Gunewardene is a Sri Lankan entrepreneur, philanthropist and fashion icon. Gunewardene founded Sri Lankan fashion and lifestyle store, ODEL. From being a sole proprietor of one store in 1990, she has piloted Odel through two decades of growth and today there are over 20 Odel stores are located throughout the island. Gunewardene was the first female entrepreneur to take a company public in Sri Lanka, when Odel was launched as an IPO in July 2010. She was globally recognised in 2010 she was named the ‘Best Female Entrepreneur’ at the seventh US Stevie Awards for Women in Business. She was also named in the list of Sri Lanka’s Most Powerful Women compiled by Echelon Magazine in 2013 and is featured in the Sri Lanka Rich List. On 11 September 2014 Gunewardene sold her shareholdings in Odel PLC to the Softlogic Group. She subsequently established the Embark brand which funds numerous animal welfare programs.